In her recent Essence Seventh Annual Black Women in Hollywood speech, Lupita Nyong’o shared a letter she received from one of her fans. The essence of the letter was this statement: “I think you are really lucky to be this black but yet this successful in Hollywood overnight.” 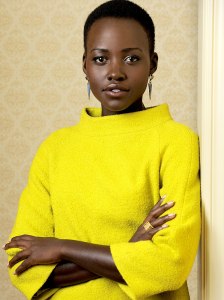 If you listened to that speech, it probably caused you to reflect on one of the most profound issues of our time: how is beauty defined? I have spoken with many about the recent rise to fame of Lupita Nyong’o since her riveting performance in the movie Twelve Years a Slave. Her performance as Patsey in the movie is nothing short of remarkable, especially in light of the fact that this was her first major role since graduating from Yale School of Drama. But I have also heard people make similar comments like the one made by her fan above, and some have expressed shock that she is this popular in Hollywood, considering….yes, considering the fact that she is so black. Forget about the fact she is extremely talented, graceful, stylish and articulate. She is beautiful, and has an amazing sense of style that has captivated the world.

Lupita, in her speech, shared the story of how she got teased and taunted about her “night shaded skin” and she would pray to God that she would wake up and be “light-skinned.” It was her mother who told her “you can’t eat beauty, it doesn’t feed you.” Lupita realized that beauty was not a thing she could “acquire or consume,” it was something that she “just had to be.” She understood what her mother meant by those words: and that is that you cannot rely on how you look to sustain you. Lupita believes that “what actually sustains us, what is fundamentally beautiful is compassion: for yourself and for those around you.” As she ended her speech, she encourages us to be beautiful on the inside, because “there is no shade in that beauty.”

The idea that someone too dark is less beautiful is pervasive in our society and our culture. It is the reason the bleaching cream industry is booming, and so many people, mostly women, go to varying extremes to lighten their skin. Even among the black race, is the prevalent idea that light-skinned and long hair, is better. How do we overcome this phenomena? Or can we? There are many explanations as to why this ideology persists. In fact, many will argue that what is portrayed in Hollywood, on television, and in magazines as “beautiful” is the source of the problem. We are fed images of what “beauty” looks like, and what “beauty” should be.

But what I liked most about Lupita’s speech, is that she changes the focus. We tend to focus more on the exterior, the physical attributes of a person and of ourselves, when we consider beauty. When really, the true focus should be on the inner being; the inner attributes of a person that make him or her beautiful. It starts there! We spend so much time trying to perfect our outward image, that we often forget to work on our character, our compassion, our love for others and most importantly, ourselves.